"I get commissions for purchases made through links in this post."

Having an air compressor piping system in your workshop delivers huge pluses to get the jobs around your projects done more quickly.

But the pain is:

Setting up a piping system is a dream to many garage hobbyists because it requires mapping a reasonable layout and knowledge of how to connect components.

If you make it wrong, lost power due to false set up will add up to the cost. Worse, if you do business, it may break the profitability.

So, what you need are:

Air compressor piping diagrams and tips that we’re going to tell you right here if you keep scrolling down.

Why do You Need an Air Compressing Piping System?

The concept of a compress air pipeline is to connect the device to an end-user unit via a system of tubes.

If you are an expert in the field, it won’t cost you any sweat outlining a diagram. But for the novice who has faith in the brochure, things will get confusing very soon.

When making a diagram for such a system, you need to be aware of the working area and requirements of the equipment. That is why end-user devices of compressed air should be an isolated location.

A spray paint station, for example, is a place that requires its own booth with good ventilation and heavy air filtering. Or a curing machine that needs artificial cooling somewhere near the outside wall.

With many of your equipment requiring an outside wall, you must find a way to deliver compressed air to all those end-users. In many cases, the distance to travel is long, and a diagram is just exactly what you need.

Common Issues in a Pipework

Crafting a line map for your air compressor in a workshop needs to focus on connectors and the shape of your property. Using connectors ineffectively can lead to air leaking. This is believed to be the major damage to your system’s inefficiency as well as bulking the bill.

To remove the probability of air leaking, there is something you can do:

Let’s dig into each factor and solve them one by one. 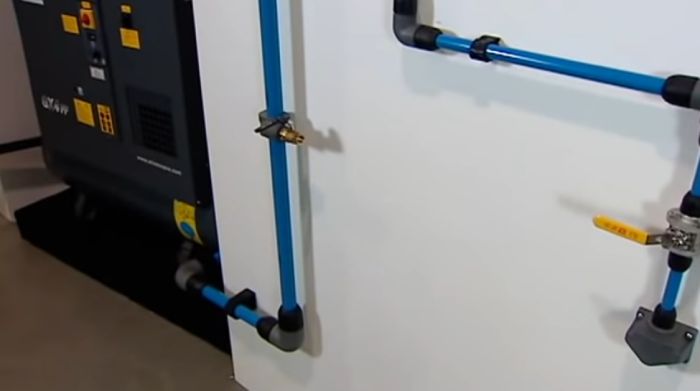 Obtrusive angles impede the flow speed and reduce pressure exhausting. Sometimes, you may see air get stuck adding pressure at one point.

You want to make sure you don’t make any sharp turns when aligning the pipes. If there are angles you have to run sharply, you want to decrease the angle of the bend.

If you make a 90-degree turn, a high chance that you will lose 3 to 5 PSID due to turbulence, that’s a lot of waste of energy.

Try to make straight paths as much as possible in the system will help the airflow more stable. 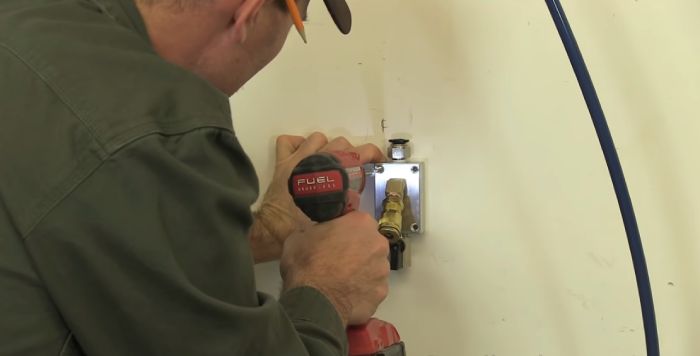 We bet if you check your air system in the facility right now, chances are you’re going to find a common problem regarding water in the pipes.

Particularly, the pipes that run along the top of the ceiling are not looped with the air system.

As air runs down to the T where you have a little pet pack valve to drain condensation, it forms droplets in your air piping.

Most of the time, those liquids will run down to the T leg to the moisture release valve. But no way a T release system can drain all moisture out effectively. And you don’t like this idea because water will corrode parts of the pipes and form flakes inside. Eventually, you will soon have a clogged system that needs repair.

Internal problem is such a pain. The best way to deal with it is to have a proper looped system.

In which, your main header line that runs around the system should be in a loop. So, you’re feeding air evenly from your compressor on both sides while still using a drip leg (the T one) with an automatic drain.

If there is any water in the pipes as air flowing downstream, that water will run down on the drip leg. The only that’s going to happen is the auto-tank drains, taking that condensation out.

Downstream of there, you will need a riser pipe at least 6 inches high. It’s really hard for air to entrain water and have it flow uphill. So, as air is flowing uphill, it will come back down to your tool.

The idea here is to make it difficult for the water to go up and make an easy path for water to run downhill. Problem solved.

An aftercooler filter is another suggestion to the problem.

It is said to remove at least 60% of the water content before it leaves your compressor. Before the liquids get into the pipe, the aftercooler filter has reduced the moisture in the airflow, ensuring less damage when air circulating.

Another solution is to draw air from the top of the compressor instead of that at the bottom. By changing the supply inlet source in the air piping system, you can cause the water from compression to fall down to the base of the compressor leaving only dry air on the top. 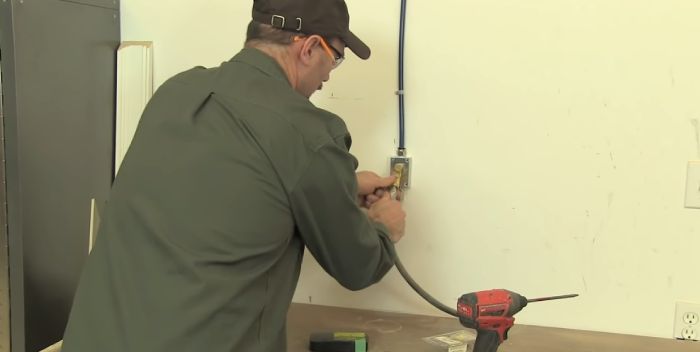 Corrosions and flakes are the main sources that are clogging the pipe. Sadly, the restriction points mostly come from valves, connectors, sensors, or driers.

These compartments squeeze in the diameter of the pipe narrowing down the pathway of the air. However, you can’t run a pipeline without those parts.

To prevent the build-up of particulates on those devices, you will need air filters. The filters will keep particles from emitting to the air compressor.

To treat blockages, you need non-corrosive pipe material. It will reduce the chance of forming obstructions as well as removing the clog without your assistance.

How to Choose the Right Pipe Materials

Regarding the previous section, we’ve got some tips for you to choose the pipe materials to prevent corrosion. 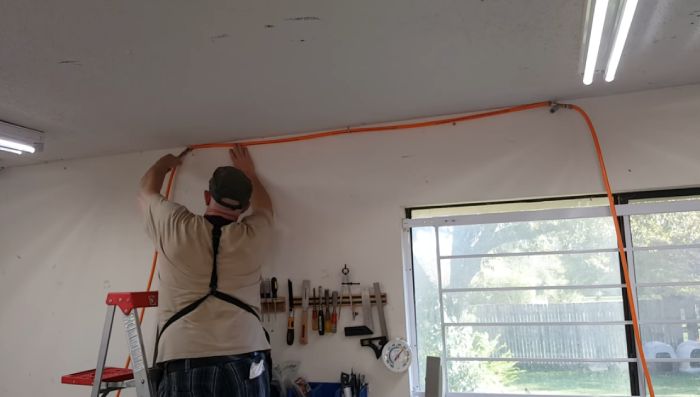 Plastic has a slippery surface that no particles can stick to. The material also doesn’t corrode. More than that, the smooth interior encourages laminar flow.

Using plastic pipes is simple. The cutting doesn’t take much time and force. It’s also easy to glue those pipes together. Plastic is cheap and easy to find. Transporting is as well less hassle.

In your diagram, plastic will place the major role of giving the path for the air to travel. The popular types of plastic used in plumping are chlorinated polyvinyl chloride (CPVC) and polyvinyl chloride (PVC). But the drawback is that they can’t withstand pressure for long.

**We do not recommend using CPVC and PVC due to the number of catastrophes people have reported. The material is banned from using in high-pressure systems by the Occupational Safety and Health Administration (OSHA)

There are approved safety materials you can utilize, alternatively.

Acrylonitrile butadiene styrene (ABS) is preferable. Besides, you can find Polyethylene (PE), and high-density polyethylene (HDPE) are among the best suitable plastic can use for air compressors.

If you’re thinking of oiling the inside of PVC pipes to boost the air stream, forget it because oil is corrosive to plastic. However, it’s possible to lubricate ABS, PE, and HDPE as those are oil-resistant.

On the overall, plastic is a budget material, but it doesn’t guarantee long-term commitment. Those pipes will soon fall and splinter, causing bursts and leaks. If you decide to use plastic for your system, it’s better to check on it regularly to cover the damage as soon as possible. 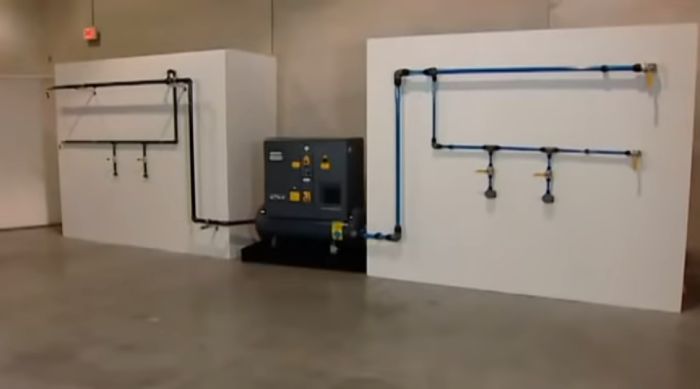 Professionals like to invest in the long run. Having a metal pipe system in your garage wipes off much of frustration of fixing it all the time.

Metal has advantages in strength and rigidity. You can expect metal pipes to handle blowouts and fractures in a significant time. It’s hard for them to get degraded by lubricants.

Like plastic, metal pipes are available in a few variants.

Some Successful Pipe Diagram Examples for Your Preference 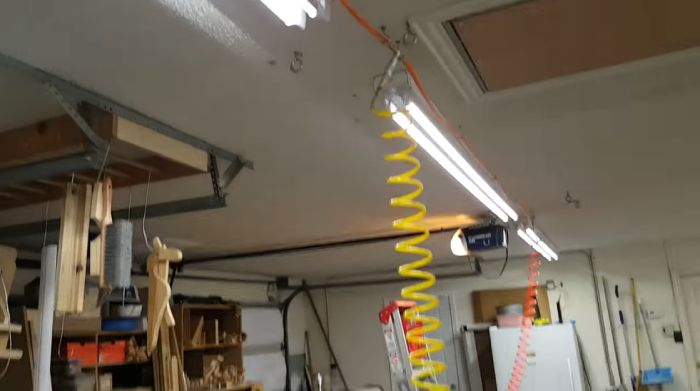 Setting up an air piping system, you will start from the compressor where you will hook a rubber line to the metal pipes. The ideal diameter for the pipes we recommend is half-inch in the schedule of 40 pipes (more or less).

**Why did we use a compressor hose instead of connecting the machine directly to the pipe?

In an ideal world, we started with the hose attaching to an air filter. The reason is to reduce the vibration on the whole pipe system when the compressor runs.

If you don’t do that, your fitting will get loose, and air leaks any time soon.

And then you might hear the pipes shaking driving you crazy.

You also want to put a second pressure gauge somewhere near the water filter. We basically keep it between 90 and 100 under pound pressure.

Moving on, you will continue the fitting. The pipe goes up all the way down the wall. At about ¾ of the way, drop a T, and extend it with coupler. Put a valve at the end to get rid of water build-up. On this T, you can put a versatile connector to plug in anything that might come in handy.

You can continue the pipe up down, around the corner, to another station where you have a T dropped. In a smart set up, we suggest using a 90-degree elbow and direct it to a side direction. When you’re exhausting liquid, it won’t come to your face.

Here are a few piping diagrams we have collected so that you can learn something from them:

In the worst scenario, you should talk to a specialist and get someone with the expertise to set up the air compressor system for you.

But more or less, you have to learn the skill somehow when you work in the shop. Also, you want to take control of the whole system so that you don’t have to call for help when it’s broken.

Don’t hesitate to share with us your experience. Any difficult on the way? Give us a buzz.

Thank you for reading.

We hope you enjoyed our article on "How to Make Air Compressor Piping Diagrams and Tips – Very useful", if so, please share and rate it.